With a décor that emits an early 70’s vibe and a compelling menu of American comfort food from Chef Vania Almeida, The Second Story Restaurant at The Belamar Hotel, situated less than a mile from the Pacific Ocean, draws a mix of hotel guests, locals, and neighborhood business people. Second Story serves three meals daily, with the most ambitious food surfacing at night, highlighted by horseradish crusted Alaskan halibut with organic mushroom risotto and honey roasted chicken breast with Parmesan polenta and roasted pistachio Brussels sprouts. The happy hour runs seven days a week and features 50% off numerous drink options and select menu items. A restaurant that bucks the “hotel restaurant” stigma, Second Story is a great choice for a night on the town, or any meal.

There has never been any doubt that the Belamar Hotel resides in a prime location, less than a mile from the Pacific Ocean, on the southwest corner of what may be the busiest intersection in the South Bay. Until recently, the main question revolved around the viability of the boutique hotel’s restaurant. That question was answered when Larkspur Hotels assumed control of the Belamar in 2007, injecting $5 million into a renovation and overhauling the upstairs dining room, which previously hosted Vibe. In March 2008, Second Story debuted in the Belamar, offering an early-1970’s vibe and a compelling menu of American comfort food from Brazilian-born Chef Vania Almeida.

The Gettys design firm smartly shepherded the transition from Vibe to Second Story, deciding on the early-1970’s design. A short walk past the hotel’s reception area, a flight of stairs leads to the inviting entrance. There, a grid of wall-mounted pedestals alternately holds cube-shaped candles and glass vases with either yellow or orange daisies.

The dining room features a wall of angled brown wood, gold cushioned banquettes, and oval white tables with modern black place settings. Gold carpets are patterned with alternating grey ovals and spades. High communal tables are grey on top and sided with gold-colored wood, with three backless, dark-wood stools per side. Regardless of where you sit, expect the table to feature a yellow or orange candle cube, plus silver and glass mills to grind sea salt crystals and whole peppercorns.

The bar area seamlessly flows from the dining room, featuring four TVs built into the wall, all playing 1970’s sitcoms. Chandeliers feature clusters of drop-down glass bowls, lit with exposed bulbs. A grey-topped bar is lined to the floor with tile columns: white, light grey, dark grey and burgundy. Behind the bar, flanking shelves of liquor bottles, are twin flat-screen TVs that are often tuned to sports.

A triangular lounge is partitioned from the rest of the flow by slatted maple walls that are stained amber. The intimate space contains gold cushioned banquettes, tan leather footstools and a flat screen TV. High-energy but unobtrusive music fills the entire floor. During the course of dinner, speakers spit out “Goody Two Shoes,” disco, and David Bowie.

This particular dinner began with a bowl of teardrop-shaped pretzel rolls from La Brea Bakery, wrapped in black linen to keep them warm. The rolls were served with soft butterballs sprinkled with alder wood-smoked sea salt.
Fresh Cut Crispy Calamari was so lightly breaded that it was possible to still see the cephalopod underneath. The tender rings and tentacles were plated on Asian slaw featuring green cabbage, purple cabbage, and carrots; drizzled with squiggles of spicy pink-orange aioli; and topped with leaves of arugula and frisee. A squeeze of lemon helped to balance the dish.

Second Story doesn’t have a dedicated sommelier, entrusting their wine program to a third party consultant who has tailored the mostly American selections to Chef Almeida’s menu. To increase accessibility and encourage sampling, all nineteen wines by the glass are available in half portions. Subscribing to this approach led to early success. The calamari paired well with a half-glass of Ramey “Ritchie Vineyard” Chardonnay from Russian River Valley, a crisp Northern California what that featured a little spice.

Chef Almeida’s market-driven soup of the day was a creamy cauliflower puree, topped with crispy strips of fried parsnip and a single cauliflower fritter. It was important to eat the light green soup quickly, before the fried bits became soggy. The soup came with cuts of Parmesan flatbread, which added texture.

Chef Almeida created an inventive improvement on an Italian classic with her Warm Caprese Salad, featuring market-fresh slices of red and yellow tomato, each topped with a molten slab of Oaxaca cheese, balsamic-soaked red onions, cuts of basil, and a cross-hatch of al dente green beans.

For our second wine pairing, we had the half glass of Pinot Noir from Summerland Winery “Fiddlestix Vineyard” in Santa Rita Hills, which was earthy but flat.

The colorful, well balanced Market Salad combined frisee, chunks of blue-veined Gorgonzola, slightly bitter baby arugula, peanut brittle-like chunks of candied almonds, juicy raspberries and a streak of balsamic vinegar.
While other dishes were good, there was little doubt that Chef Almeida’s best dish was the luscious slab of Horseradish Crusted Alaskan Halibut, which came apart in sheets at the touch of a fork. The crust was like crispy breadcrumbs, but with slight kick from horseradish. The tender fish was topped with a thatch of micro greens and plated on a bed of organic shiitake and portobello mushroom risotto, flared with discs of roasted purple and yellow beets. The impressive entree was ringed by a caramel-colored, four-citrus sauce, a tart, slightly sweet reduction of grapefruit, orange, lime, lemon and blood orange.

The third and final wine didn’t come close to matching the high quality of the halibut. It was a Two Hands “Angel’s Share” Shiraz, from McLaren Vale in southern Australia. This red wine didn’t have the depth of flavor I was hoping for.

While the house-made bread pudding with bourbon caramel sauce was enticing, I was already four dishes into the meal and went with a lighter duo of Mini Cup Cakes from Becker’s Bakery of Manhattan Beach. There was one yellow cake with lemon frosting, dusted with yellow sugar, and a chocolate cake with milk chocolate frosting, sprinkled with multi-color candy discs. The plate was decoratively strewn with purple flower petals. Though the cupcakes weren’t made in house, they were respectable renditions of a trendy but timeless baked good.

Considering Second Story is situated in a hotel, there’s a refreshing lack of pretension and formality, both in the dining room and on the plate. Chef Almeida’s crisp, clean cooking and colorful presentation ensure that the Belamar Hotel now hosts a solid South Bay dining option. 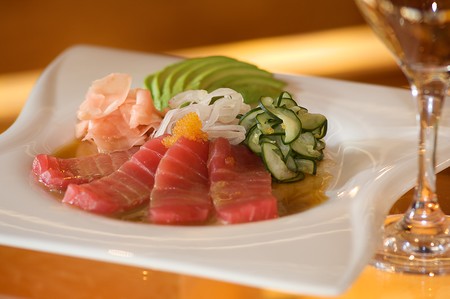 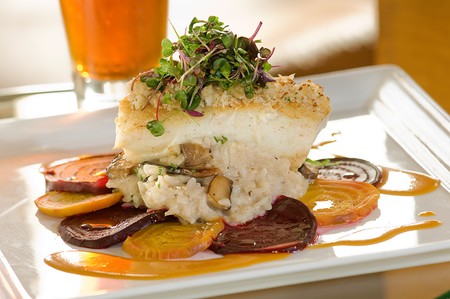 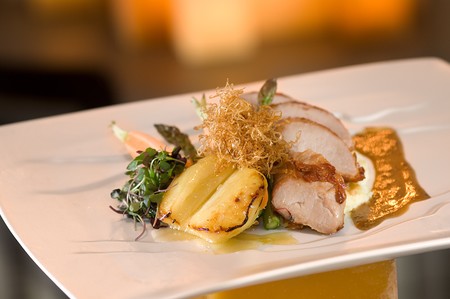 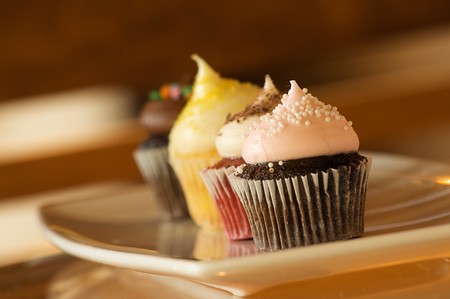 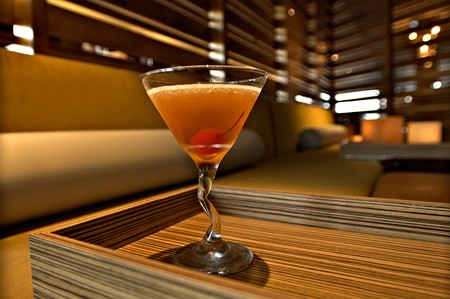 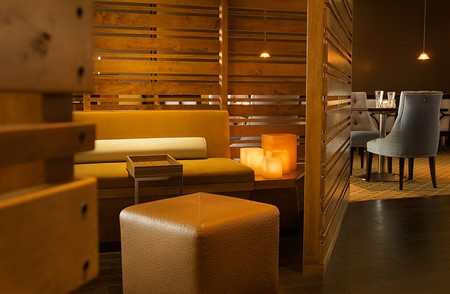 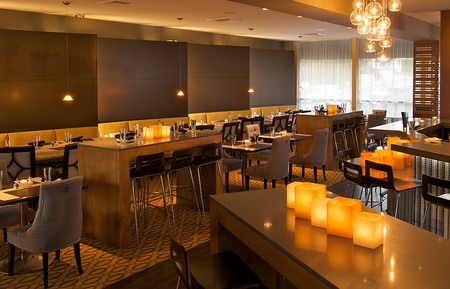 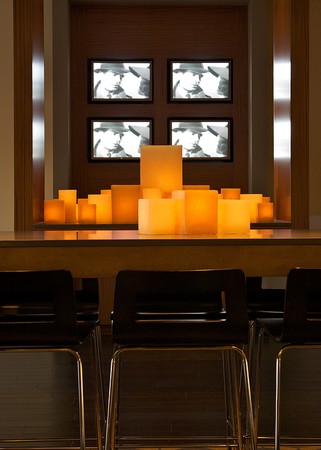 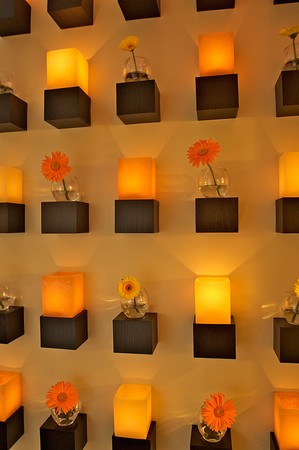 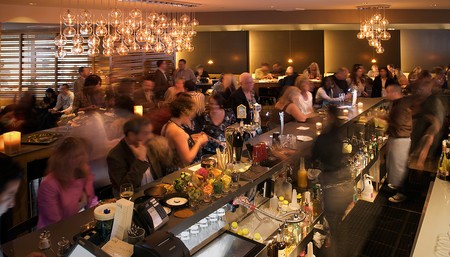 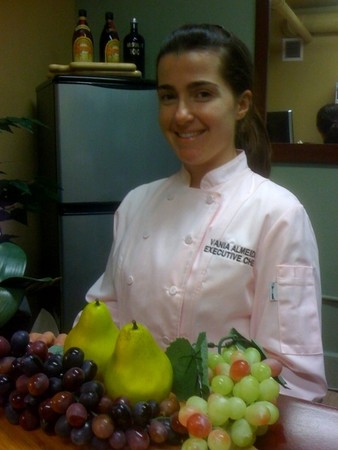 Chef Almeida poses with fresh fruit in the Belamar.

The service was A+ and the food was definetly worth the trip from Irvine. We were greated by very friendly host and servers which knew the dishes they were serving. Will definetly go back..

I was looking for a really nice place with a intimate setting for my wife's birthday. It appears that I found the right place! They were great. I tried to make the reservation on thier website, and that didnt workout too well. I did call in, to the hotel it was in, and they connected me with the facilties personnel. They were absolutely awesome. The Manager Chris, was on duty at the time, and he personally called me to verify thhe reservation. I told him it was my wife's birthday, but not intentionally and they went out of the way to make her feel special. I did good cause my wifes loves to eat at differnt places. The waiters, and waitresses were awesome. Very nice and I didnt feel they were doing it just for a tip. It started out not being very many folks, so that made even better. It is not a very big place , but there in lies the mystique, and beauty of it. So from the valet, to the hotel, and resturaunt, they were awesome. We will dine there again. Food Staff, and facility is great.