Morels French Steakhouse & Bistro is synonymous with a fun and fulfilling dining experience at The Grove in the heart of Los Angeles. With a diverse seasonal menu ranging from cheese and charcuterie to fresh seafood, prime cuts of steak, and even fondue, this successful L.A. establishment caters to the palates of all who walk through the doors. Enjoy a glass of wine and wonderful views of The Grove's lively fountain while you dine. Morels French Steakhouse offers more than 60 wines by the glass, and for those who truly enjoy a superb pairing of wine and cheese, Morels provides a broad selection of more than 60 artisan cheeses alongside 400 French and California wine varietals by the bottle. Wherever your taste preferences may be on the vast spectrum of culinary flavors, Morels French Steakhouse & Bistro at The Grove is willing and able to meet and exceed your expectations. So stop by and enjoy a satisfying meal; at this prime location you may even spot a celebrity or two!

A Quiet Oasis Amidst a Busy Town

In the fast paced Los Angeles lifestyle, finding a place to feel at home amidst the whirlwind of tourists and aspiring stars can be difficult. At Morels French Steakhouse and Bistro, not only is the food just like mom used to make, but the staff – from the hosts to the management – go out of their way to welcome you into the private oasis where LA natives come to feel like part of the family. Morels is part of the Market City Caffe Hospitality Group, founded by Salvatore Casola, Sr. in 1987. The management staff credits him with keeping the family environment alive in the restaurant over the years. Today the group is owned by Chipper Pastron, the co-founder of the group, and Salvatore Casola, Jr.

Located in the heart of the infamous Grove shopping center for ten years now, Morels is a family-owned restaurant with a sister location on the Las Vegas strip. The majority of the seating is on the patio, which ensures a front row seat to one the city's prime areas for people watching. Seating is also available inside and upstairs, which can be reserved for private parties of six people or more. A prix fixe menu is offered for groups larger than ten people with options for both indoor and outdoor tables.

As my dining companion and I approach the restaurant, we are greeted immediately by two of the host staff with big, welcoming smiles. They show us to a table shaded by a large umbrella with a wonderful view of the fountain that functions as the Grove’s centerpiece. Diners who wander inside to take a peak are treated to a grand staircase that curves along the wall, which is covered in mismatched paintings with thick golden frames that mimic a messy museum collection. On the ground floor, opposite the tables along the wall, is a full bar which runs the length of the restaurant, boasting both alcohol and various coffee concoctions. Finally, between the staircase and bar is a display full of ice to showcase the fresh muscles and other seafood on the menu for the day.

Shortly after we sit down, the executive chef, Stephen Rodriguez, and general manager, Douglas Wickard, approach our table to welcome us to the restaurant. Stephen explains that the cuisine featured on his menu is southern style comfort food; food that reminds diners of home and recipes that are based on seasonal produce availability. From soups like the French Onion and Matzo Ball, to appetizers like the Charcuterie Platter or Fondue Cheese Fries, and salads to please vegetarians and meat lovers alike such as the classic Caesar or the Nicoise, the starters alone are enough to tempt the palate. But the real must try plates come from the entrée section, with burgers and sandwiches offered at lunch, a variety of chilled seafood, and several options of meat and hot seafood like home-style Fish and Chips or the Braised Lamb Shank. Rounding out the meal is a tantalizing spread of desserts, from the White Chocolate Pumpkin Pie to Chocolate Profiteroles and Apple Crumble.

Not to be missed is the impressive wine list, featuring wines primarily from France and California, as well as a few Italian reds and other assorted varietals. The list, which received the prestigious Wine Spectator's Award of Excellence in 2010, features options by the glass and by the bottle, including reds, whites, rosés, and sparkling wines. Always feel free to ask for a recommendation from the staff when trying to pair a good wine with your entrée, chances are they will not let you down.

Once we take our seats, we are greeted by our server, Johnny who brings us a wooden platter with fresh, warm French bread and several crostini, accompanied by a dish filled with a bright green sauce. We can hardly wait to dig in, so as soon as Johnny leaves with our drink orders, we each grab a slice of bread and lather it in the green mixture. It is olive oil based and tastes pleasantly fresh, almost like pesto, with subtle hints of garlic and parsley as well as a slight bite from red pepper flakes. Once we have had our fill of bread, Chef Stephen himself presents us with several appetizers.

The first is the Roasted Beet Salad, a pile of mixed greens atop a circle of slightly pink beets, covered with chunks of goat cheese and a sprinkling of pepitas. The first thing I notice as I take a bite is that the greens are dressed with a molasses vinaigrette that is barely there, but is just enough to add sweetness that complements the tangy goat cheese and the caramelized sugars in the beets. The beets themselves are soft but hold their structure when pierced with a fork, and they taste slightly pickled. The pepitas add a nice crunch and just enough texture to emphasize the delicate flavors of the cheese and beets.

Next we are treated to Brie Stuffed Dates, which are fried in a light coating of tempura batter and plated atop a smear of pecan butter. The saltiness of the tempura and pecan butter is the perfect counter to the sweetness of the dates. Each is loaded with just enough brie to be full, but not bursting, presenting a light dish overall. The pecan butter, made similarly to peanut butter but slightly sweeter, tastes good enough to eat on its own.

Rounding out our appetizer course is the classic French Onion Soup, served in a traditional tall, white ceramic ramekin and oozing with a thick coating of roasted cheese. After just one bite of the creamy Gruyere cheese, neither I nor my companion can resist pulling large strings of cheese into our mouths. The broth underneath is soaked into French bread and is hearty and meaty without overwhelming the delicate carmelization of the onions, which are piled from the bottom of the dish right up to the layer of bread. After we scrape the remaining cheese off the bottom of the ramekin, Stephen and Johnny arrive with two more plates to replace the empty ones.

Our next course, the entrée, looks to be exactly the southern comfort food Stephen had promised us earlier. First we focus on the Ribeye steak, which is accompanied by a small dish of mixed stewed greens. The greens, a medley of collard, kale, and others, are salty and almost creamy in texture with a light onion flavor that screams southern cuisine. The real star of this dish, however, is the tender, perfectly cooked steak, medium rare as we requested and served with a pad of herb butter. It is perfectly seasoned, and simply melts in my mouth. I barely need a steak knife to slice off a piece, and chewing is practically replaced by just letting it sit on my tongue for a moment, savoring the juicy tenderness. The flavor is further enhanced by the herb butter, which adds just enough richness without overpowering it.

Once we are satisfied that we have picked every last bit of meat off the plate, we turn our attention to the Short Rib over Grits. The braised beef rib sits on top of a hearty helping of grits, dressed with a moderate serving of gravy, peas and carrots, peppered throughout. I marvel immediately at how the meat just falls off onto my fork, no knife required. It is extremely tender and pleasantly salty; it tastes “just like mom used to make” with slow cooked flavor infused into every bite. The grits are buttery and creamy, adding a wonderful texture to the meat. They are al dente but still smooth, and don’t have the often grainy texture grits take on. When mixed with the salty gravy and vegetables, the grits taste like a creamy, savory pudding that has us all but licking the plate clean.

After we let our stomachs rest for a bit, Stephen and Johnny arrive with the final course – dessert. We are treated to the Chocolate Bread Pudding and Crème Brulee Trio. The first is served in a white ceramic ramekin, reminiscent of a French country home. It is topped with a generous scoop of vanilla ice cream, drizzled with a caramel rum reduction, and finished with candied pecans. The pudding is not overly sweet, but has strong notes of cinnamon and dark chocolate that take center stage when mixed with the sugary pecans and vanilla bean ice cream. Slightly crisp on the outside, soft and chewy on the inside, the bread pudding also benefits from the added crunch of the pecans and the subtle caramel flavor of the sauce.

Last but certainly not least, we move to the Crème Brulee Trio, served in three small identical white espresso cups, each topped with a thin biscotti cookie. The biscotti itself has a mild anise and lemon flavor, and while crunchy, it is not sweet, which makes it perfect for dipping into the custard. The first, vanilla, embodies what a traditional crème brulee should be: sweet and simple, with a sugary crisp on top that tastes just a tad smoky without being burned. The next cup contains a chocolate custard, which tastes similar to chocolate mousse but with a thicker texture. The third cup contains caramel custard, which is much sweeter and denser than the other two, and matches the flavor of the sugary crust on top.

After we devour dessert, Johnny presents us each with a steaming cappuccino from the coffee bar. With several different options, like lattes, espressos and four quality coffee blends, it’s easy to find a favorite. Thick and creamy but slightly bitter, the cappuccino proves to be a wonderful ending to a delightful meal. Johnny and Douglas pop by to chat periodically as we enjoy our coffee, and although the restaurant is beginning to fill up, there is never a feeling that we are being rushed out to seat another table.

Johnny clears away the last remnants of dessert and leaves us to enjoy the final sips of our cappuccinos. We glance once more across the beautiful courtyard centerpiece of the Grove. At last we get up from our table and each member of the staff gives a wave, wishing us a wonderful evening. We say one last sleepy goodbye to Johnny and Douglas, who after just a few hours feel like old friends, and leave our little French oasis to return to the busy Los Angeles lifestyle. 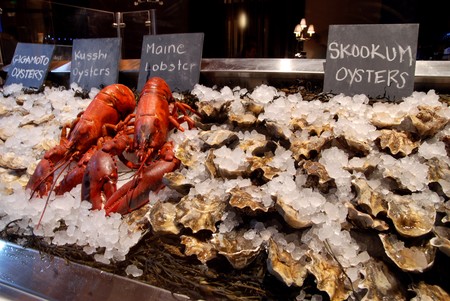 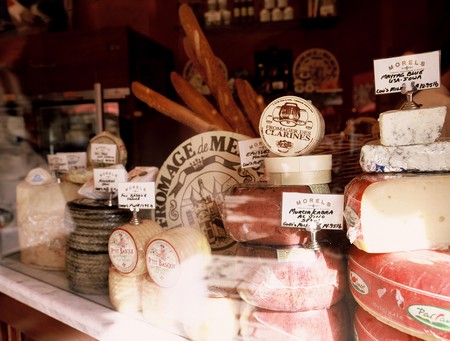 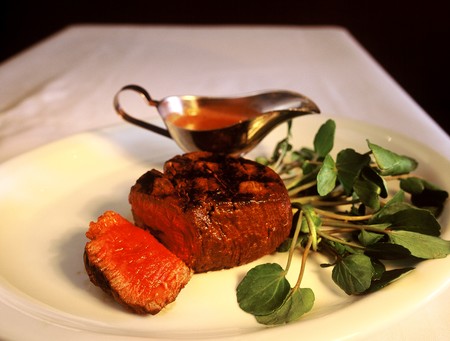 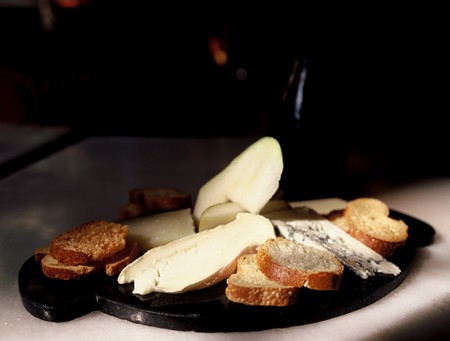 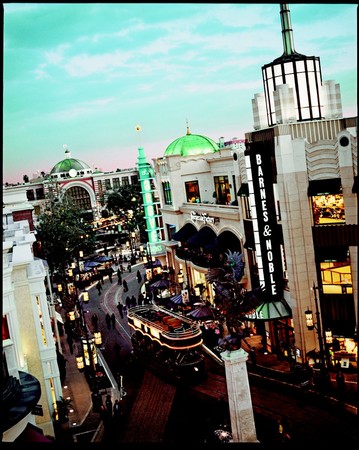 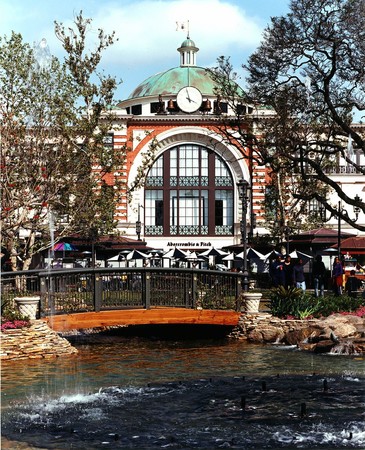 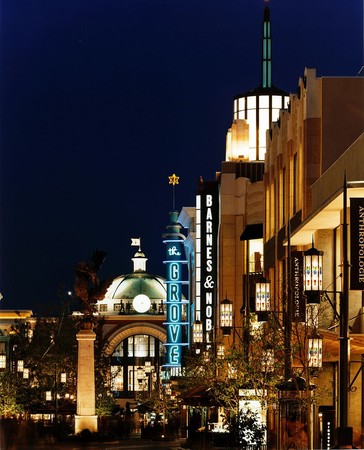