Moonshadows has been a Malibu institution since the 1960s, primarily due to the sweeping views of the Pacific. On weekdays, the restaurant is popular with locals and beachgoers. On weekends, the lounge and patio fill with a glitzier crowd that’s craving nightlife. The menu found new life in 2003 with the addition of Chef Joachim Weritz. The native German infuses Asian and Mediterranean influences in contemporary California dishes like sake braised short ribs and crispy panko fried oysters with mirin-passion fruit mignonette. Managing Partner Andrea Bullo fine-tuned a 130-bottle wine list and garnered a 2007 Wine Spectator Award of Excellence."

Sweeping views of the Pacific first drew diners to Moonshadows in the late 1960s, and it’s that same stunning setting that still draws Angelenos to the Malibu institution. Moonshadows might have a reputation for its laid-back waterfront vibe, but with Managing Partner Andrea Bullo out front and chef Joachim Weritz in the kitchen, it turns out there are other reasons to drive to Malibu.

The space isn’t much from the outside, sandwiched between beachfront residences, with a blue awning, ivy covered walls and a sign with blue block letters. Inside, the two dining rooms and Blue Lounge bar are minimally decorated, with champagne-colored walls, light brown tables, and Navy blue carpeting. The only distinctive design feature is a series of vertical panels of movie-frame-like blue art glass, depicting different phases of the moon.

The wood patio is undoubtedly the most exciting area of the restaurant, especially in warm summer months. A glass-fronted railing is the only thing that separates guests from unobstructed views of the ocean. Stand near the railing and look down to see crashing waves on moss-covered rocks. Booths line the yellow walls on the far side of the deck. White cushioned “beds” and matching ottomans surround low wood tables. If the sun proves oppressive, there are green umbrellas on hand. If drinking is in order, there’s a wood bar with a thatched roof, flanked on either side by a Buddha’s head statue.

On weekdays, the restaurant is particularly popular with beachgoers and diners from Malibu and nearby Pacific Palisades and Santa Monica. On weekends, the lounge and patio draw a ritzier crowd that shows up to drink and dance to the live DJ.

Joachim Weritz has been Executive Chef of Moonshadows since 2003. His mission is to pair his Mediterranean and Asian influences with seasonal, sustainable Californian ingredients, and he does a nice job.

Washington state Hama Hama oysters on the half shell appeared on a bed of crushed ice that was decoratively strewn with seaweed and a single purple orchid. The chilled oysters were accented with a squeeze of tart lemon and spooned with tangy ponzu vinaigrette.

Wild Caught Mexican White Shrimp Cocktail was similarly plated. The large shrimp were firm but bland, served with a dish of red Moonshadows Kicked-Up “Peppar” Vodka Cocktail Sauce, which had some decent bite. Unfortunately, the success of this starter hinged on the shrimp, and they were unspectacular.

Spicy Ahi Tuna Tartare combined colorful striations of pink sushi-grade ahi, crisp marinated seaweed, a base of crunchy “gingered” cucumber, and a roof of creamy avocado puree. The base of the tartare was surrounded by a creamy wasabi drizzle, which imparted a nice spice kick. Finally, the tuna tower was plumed with a single crispy wonton chip, which was studded with black sesame seeds.

Japanese Hamachi Sashimi Salad centered on thin slices of rosy pink yellowtail, which also goes by Japanese amberjack. The silky sashimi hosted sweet cuts of Cara Cara orange and tangy citrus dressing and was plated on slightly bitter arugula. This was a well-conceived dish that was clearly of the moment.

Crunchy Panko Fried Hama Hama Oysters were nice and meaty, with crisp coats of panko. The oysters appeared on the half shell with a sweet mango-pineapple relish, and a salty and smoky bacon aioli. For more sweetness, Chef Weritz added mirin-passion fruit vinaigrette to the shell. A pile of rock salt held the oyster shells in place on the plate.

Our cup of Northwest Pacific Seafood Chowder hosted a creamy white mix of clams, halibut, salmon, bay shrimp, dill and cream. It was a hearty soup, but not too heavy.

Roasted Organic Red and Yellow Beet Salad is a justifiable house favorite, a six-inch-wide cylinder of diced beets topped with a creamy layer of tangy Napa Valley goat cheese and a final crust of crushed roasted walnuts. Cubes of sweet caramelized apple spilled around the base of the beet tower, along with frizzy frisée and a drizzle of beet-walnut vinaigrette.

Oven Baked Red Aka Miso-Citrus Glazed Black Cod is another Weritz signature dish, with good reason. The tender fillet came apart in luscious sheets, plated with ginger braised baby bok choy and four firm ponzu-soaked shitake mushrooms that looked like the points on a compass. The final component was a central mound of matcha green tea rice, which nicely soaked up flavors from the dish’s combined juices.

Managing Partner Andrea Bullo assigns each sake on his list a “plus” or “minus” number, to designate the level of sweetness. With the cod, he suggested a carafe of Junmai from Kamotsuru Tokubetsu in Hiroshima, which scored a sweet +4. It was supposed to have “complex notes of smoke and mushroom.” We didn’t detect those flavors. However, the sweet rice wine complemented our cod experience, and the light blue art glass carafe was nice and decorative.

Asian Spiced Braised Lamb Belly was a stellar daily special, four lacquered cubes of thick lamb bacon that were richer and more complex than its porcine counterpart. With each square of meat, we received a little pile of sweet apricot-sour cherry chutney studded with green pumpkin seeds, a crisp thin-sliced lotus root that resembled the face of a rotary telephone, and licorice-like star anise jus. The stone fruit chutney may have been a tad too sweet, but overall, the dish was successful.

Bullo suggested pairing the short ribs with a carafe of Daiginjo sake from Dassai in Yamaguchi, Japan. The tasting notes on this sweet +4 sake were more recognizable on the palate: “stewed pear” indeed.

For dessert, we opted for Moonshadows Rhubarb and Zinfandel Crisp, a seasonal cobbler with California Bing cherries, brown butter, and a scoop of vanilla ice cream. With the crust-capped cobbler, we drank a glass of Fonseca #27, a sweet Ruby Port that played nicely with the tart Bing cherries.

Malibu isn’t known for its restaurants. Many restaurateurs bank on the hope that “27 miles of scenic beauty” will be enough to draw diners. In many cases they’re right. It’s heartening to see a restaurant like Moonshadows that’s striving to ensure that its guests receive more thoughtful food and wine. 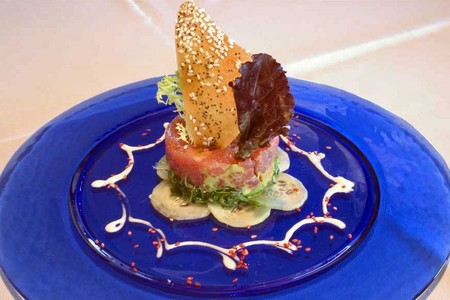 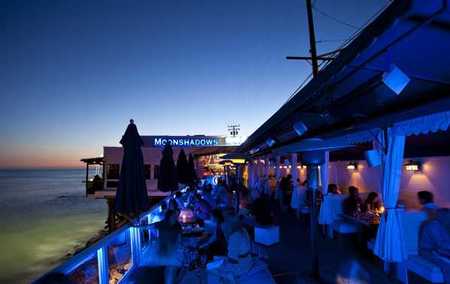 This is a great place to come for a dining experience overlooking the ocean. The rib-eye steaks a tasty and nice proportions. A must place to go.

This restaurant was great. The view was beautiful. Very romantic setting. The bar is awesome. The food was great. The lobster and crab ravioli was delicious. I will be returning. Just for advice park on the street because they charge you $5 to drive your car 5 yards from the parking lot to the side of the restaurant. But overall great time.

Its a beautiful place.i like the food portion,the view and the patio. Me gusto muchisimo celebrar mi cumpleanos aqui. I recommend this place to all couples.

To start the evening we waited a half hour even with a reservation. TO compensate for our wait they sat us opposite the kitchen door, near the wait station so not only did we have to deal with huddle of lazy waiters but we had to yell over the clanging pots. The service was very slow,the food was so-so.

Too many negatives to return