Bill McCormick and Doug Schmick have spent over three decades building and creating a seafood-based restaurant. The Beverly Hills location of the popular franchise resides on the ritziest stretch of Rodeo Drive. Tourists and locals alike populate the plush patio to people-watch and enjoy impeccably-sourced fish, crustaceans, and bivalves; the restaurant offers a different selection of seafood every day, depending on what’s in season. Don’t leave without trying a dessert, such as their Upside Down Apple Pie with caramelized walnut crust and dulce de leche ice cream. When you’re hungry for seafood, stop by McCormick and Schmick and enjoy scrumptious seafood dishes.

Bill McCormick laid the tracks for his seasonal seafood concept in 1972 by purchasing Jake’s Famous Crawfish, a landmark seafood restaurant in Portland, Oregon. Within two years, McCormick partnered up with Doug Schmick, a management trainee at Jake’s, and by 1979, they opened their first eponymous restaurant in Portland. Today, the duo employs over 5000 people and owns over 50 McCormick & Schmick’s restaurants, a piscine empire that spans from Seattle to San Diego and Boston to Boca Raton.

The Beverly Hills branch of McCormick & Schmick’s is situated on an especially swanky stretch of the ritziest street in what might be the ritziest town in the United States. Two Rodeo is a one-block upraised strip mall designed to look like a classic European street, laid with cobblestones and lined with faux bougainvillea, whose purple flowers are always in bloom. Glamorous neighbors include Tiffany & Co., Versace, and Porsche Design. On weekends, the piazza is lined with tourists gunning for a star sighting and hungry for a taste of glamour. During the week, Two Rodeo primarily hosts an older crowd of locals and businessmen.

In warmer weather, the scene is planted on the McCormick & Schmick’s patio, bracketed by high stone and brick walls, lined with planters. Two Rodeo often resembles a catwalk, considering all the fashionable people on display, and the patio offers prime people-watching opportunities. A towering, carved, charcoal-colored obelisk pays homage to the restaurant chain’s Pacific Northwest roots. During cooler months and at night, there are stand-up heat lamps to warm the crowd.

Inside, the plush dining room sports handsome dark wood, a decorative stained glass ceiling and paintings of fish on the walls. Four-top tables predominate, but there is also a row of more private booths along one wall. The handsome interior is more conducive to business or romance, while the patio is more festive. At the bar, there are stained glass windows featuring sea creatures like lobsters, shrimp and seahorses.  There’s also a flip-board counting down to St. Patrick’s Day. Regardless of where you sit, expect up-tempo rock music, drawing heavily from the ‘70s and ‘80s.

As soon as we were seated, our waiter brought a slab of fresh sourdough bread, served with a small crock of rich butter that was sealed with a cover imprinted with the restaurant’s logo. The bread was soft and addictive, so it disappeared quickly. Thankfully a busboy was vigilant about refreshing our plate and crock.

Each branch of McCormick & Schmick’s prints their menu daily, depending on what varieties of seafood are in season. The Beverly Hills offerings are so in-the-moment that the seafood on the menu at lunch may differ from those at dinner, depending on the timing of their daily seafood deliveries.

To start, since I would never pass up any menu item that was bacon-wrapped, I ordered Pancetta-Wrapped Prawns. Three grilled shell-on prawns were brushed with a semi-sweet hoisin barbecue glaze, topped with crispy julienne scallions and plated with fresh pico de gallo.

The seafood that appears in the silky Seafood and Corn Chowder varies, depending on the chef’s whim. The chowder that evening utilized chowder-soaked chunks of Atlantic salmon, but the kitchen has also been known to incorporate halibut and mahi mahi. Since it was a cool night, each creamy bite was a warm reminder of chowders past in New England. For my dining companion’s Lobster Bisque, our waiter presented a bowl containing a small pile of lobster meat and a finely-chopped cilantro, then poured the bisque from a pitcher. The hearty, deep orange liquid packed plenty of flavor.

Since we were dining at a “Pacific seafood grill,” we bypassed the Free Range Brick Chicken Breast, Double Cut Pork Chop, and various steaks in favor of seafood. I was intrigued by the Kailua, Hawaii Ahi Tuna, but wasn’t convinced foie gras and watermelon rind relish were fitting accompaniments. Instead, I ordered Hawaiian Mahi Mahi, a grilled fillet set atop cubes of butternut squash and crispy Himalayan red rice. A smoky mash of eggplant “caviar” - roasted Middle Eastern eggplant dip – rounded out the plate’s flavor profile.

My dining companion selected Georges Bank Sea Scallops, plucked from a shallow bank between Cape Cod and Nova Scotia. The mollusks, two inches across, were halved and seared, a process which had caramelized the scallops’ natural sugars.They were then set atop a salad consisting of wilted arugula, diced tomato, finely-chopped garlic, basil and fingerling potatoes. The slightly bitter taste of the arugula counter-balanced the mild sweetness of the tomatoes.

My other dining companion ordered Lake Superior Whitefish, although unfortunately, the restaurant had sold out of the fish. Thankfully, the kitchen was accommodating, offering to prepare several other varieties the same way. She selected California halibut. The meaty fillet was almond-crusted, plated on a bed of extra virgin olive oil potatoes, haricot vert and yellow wax beans. Drizzled with a chive beurre blanc and garnished with finely chopped chives, the fish worked out well, luscious and white, sheets that pulled free at the touch of a fork.

McCormick & Schmick’s takes their cocktail menu seriously, employing a mixologist who utilizes fresh fruit and herbs. The restaurant divides their detailed, history-laden cocktail menu by era. Early Days and Golden Years (1806-1920) includes the Virginia Mint Julep, the Singapore Sling and Brazil’s national cocktail, the Caipirinha. Prohibition and Beyond (1920-1950) incorporates the Negroni, the Parisian Sidecar, which originated at Harry’s American Bar in Paris, and Vic’s Mai Tai, dating to Trader Vic’s in 1944. We were taken with the Modern Cocktail Creations (since 2005), particularly the awkwardly named Guava Sexy – Stoli Vanil, pureed guava, fresh lime juice, ground clove and Angostura bitters. There’s also an extensive wine list, including a balanced list of Chardonnay, Cabernet and Cabernet Sauvignon, plus other varietals. There are even 25 wines by the glass.

The cheese course sounded interesting, anchored by Manchego and Humboldt Fog, but with little remaining stomach space, we limited ourselves to splitting two desserts. Upside-Down Apple Pie arrived warm, topped with a crisp caramelized walnut crust and a scoop of dulce de leche ice cream, rich with cooked-down condensed milk. The bowl was drizzled with caramel sauce and garnished with thin-sliced strawberries and mint leaves. Brioche Bread Pudding arrived in a four-by-four inch square, crisp bread folded with ribbons of custard, topped with more strawberries and mint leaves. The bread pudding was supposed to come with caramel and chocolate sauces. The plate featured a squirt of caramel sauce in each corner and there was no chocolate sauce in sight, but the flavors were still well-balanced.

Bill McCormick and Doug Schmick have spent over thirty years dominating the seafood restaurant industry like few others, and it shows. Their fish, crustaceans, and bivalves are impeccably sourced and well-executed. If the founders stick with this formula, it shouldn’t be long before McCormick & Schmick’s goes global. 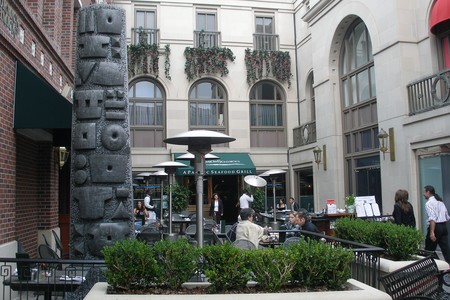 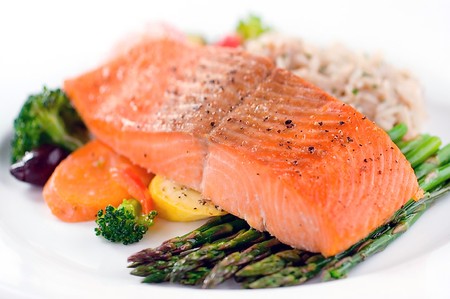