La Serenata celebrates fine Mexican cuisine and quality service. As a family affair that has lasted over 20 years, this popular eatery has expanded to three locations and continues to draw a loyal following. Jose Rodriguez is the visionary and chef, using his creativity and commitment to authenticity to construct flavorful and healthy dishes. The traditional and less nutritious use of lard has been substituted for olive oil in favorites like their fish tacos and salmon enchiladas. Rodriguez also prides himself for their unique mole sauce, which introduces a slightly sweet presence to the chicken specialty. The décor exerts simple elegance, welcoming all. Come delight your taste buds with these tasty Mexican seafood dishes.

Jose Rodriguez and his wife Aurora opened the first La Serenata de Garibaldi on a run-down stretch of Boyle Heights in 1985. After a year, Jose’s traditional Mexican dishes were drawing a steady lunch crowd of downtown lawyers, businesspeople, and government workers. As the La Serenata concept continued to take hold, Jose and Aurora were able to expand in size and in scope, creating a sizeable repertoire of seafood specialties. In 1994, the couple expanded their concept to the Westside, opening a casual offshoot called La Serenata Gourmet near the Westside Pavilion. In 1997, Jose and Aurora completed their culinary manifest destiny by opening a second La Serenata de Garibaldi one block from Santa Monica’s Third Street Promenade.

During the week, the lunchtime business crowd fuels the Santa Monica restaurant. On Friday and Saturday nights, La Serenata is popular with daters. The retail-heavy neighborhood has upgraded its look over the past decade, but La Serenata de Garibaldi is still comparatively stylish. The dining room centers around a tan, gazebo-like kiosk with a roof lined with Spanish tiles. Orange walls are lined with colorful paintings depicting Mexican home cooks and buildings. Faux balconies feature mirrored double doors, metal railings and potted flowers. Intricate cast iron railings and chandeliers complete the handsome, south-of-the-border look. Upstairs, a semi-private dining area looks down onto diners below, perfect for a special occasion or more seclusion. There are more vivid paintings, plus striped banquettes and sun-shaped metal wall hangings.

Soon after we were seated downstairs, a waiter brought a plate strewn with feather-light corn tortilla chips and four wedges of fresh-grilled Brie and tomatillo quesadillas, featuring soft flour tortillas. This novel take on chips and dip was highlighted by a dish of spicy red salsa, slightly smoky and lip-stinging.

By ordering main courses, we were each entitled to a bowl of the soup of the day - lima bean. The fresh yellow-green soup was made with chicken stock, olive oil, garlic, onions, epazote, and of course lima beans. This is a popular soup on holidays in northern Mexico, for good reason.

Since La Serenata de Garibaldi is known primarily for seafood, we made sure that both appetizers originated in the sea. Callos de Hacha a la Plancha showcased a quartet of sautéed jumbo sea scallops, a generous portion of naturally sweet bivalves piled high with strips of red chilies, smoky green Poblano chilies and almost-caramelized onion, plus sliced mushrooms. The plate was garnished with a carved radish and served with a basket of steaming grilled corn tortillas, to build our own tacos. The tortillas were wrapped with a green cloth, to keep them warm.

The fish empanada and fish quesadilla were both encased in fresh cornmeal, but to save stomach space, we selected the smaller Empanada de Pescado. The fish varies depending on what’s market-fresh. In this case, that meant mahi mahi. The golden fried empanada was crisp outside, filled with chunks of flaky white fish and oozing white cheese. The surprisingly light cornmeal turnover was plated on tangy green tomatillo salsa next to a dice of carrots, potatoes, zucchini, and scallions.

Since there was an entire menu section devoted to Camarones Gigantes – giant shrimp – I selected the option with cilantro sauce. Five shrimp were plated in a circle, emanating from a central point like sunbursts. The crustaceans were slightly overcooked but sweet, and the creamy lime-green sauce was piquant and delicious, especially when mixed with the molded mound of orange-tinged rice. The entrée was served with a dish of sautéed zucchini, red peppers, cabbage and green beans, a light but flavorful accompaniment.

Asada Tampiquena was a plate of tender charbroiled beef tenderloin named for Tampico, a city on the Gulf of Mexico. The foot-long, thin-cut filet was topped with strips of Poblano chilies and onions, lightly drizzled with white crema. The loaded plate also contained a Monterey Jack enchilada, rubbed with red salsa and sprinkled with more shredded white cheese; acidic pico de gallo, served with a sprig of parsley on a piece of iceberg lettuce; and a pile of fresh-made guacamole, studded with crunchy red onions and bedded on a tomato slice. A dish of stewed pinto beans and another tortilla basket completed the entrée.

When it comes to wine, the Rodriguez family defers to downtown’s San Antonio Winery to update the list and supply the bottles. There were 24 wines on the menu, 17 available by the glass, including reasonably priced options from California’s Central Coast, and Mexico’s Baja Peninsula. We were intrigued, but both opted for a House Margarita. Serenata’s Finest combined three premium tequilas - Jose Cuervo Reserva de La Familia, 1800 Anejo, and Sauza Hornitas – plus a proprietary “special mix” and Bols Triple Sec. With a drink this balanced, there was no choice but to serve it on the rocks, with the rim of the glass lined with large granules of rock salt and a lime wedge.

The La Serenata House Margarita combined Gold Tequila, Triple Sec, fresh lime juice, and more “special mix.” There was the option to add fresh peach, mango, strawberry or melon puree, and we took it, selecting mango, which added a nice sweetness. The drink was available on the rocks or “frozen” – ice blended. We chose the latter preparation. The rim of the sweet and sour yellow drink held no salt, but featured wedges of orange and lime.

After our plates were cleared, our waiter presented us with a wooden dessert tray holding five options. There was an individually sized Key lime pie, pumpkin cheesecake and flourless chocolate cake, plus a dish of chocolate banana bread pudding and a slab of tres leches cake. Jose and Aurora’s son Marco Antonio makes the desserts daily for all three restaurants at La Serenata Gourmet, just a few miles away.

On our waiter’s advice, we selected a wedge of tres leches cake, soaked in condensed, whole, and nonfat milks, and then topped with a half-inch layer of whipped cream, a single strawberry slice and a mint leaf plume. The cake arrived in a shallow pool of cinnamon-tinged milk, with a single line of purple, jam-like raspberry sauce running across the base. The cake was deluged with milk and soggy, but had winning flavor.

The bread pudding featured cubes of bread folded with sliced bananas and chocolate nuggets, then drizzled with rich caramel sauce and topped with a mint-leaf-studded scoop of vanilla ice cream. The green plate was garnished with three thin strawberry slices. We enjoyed the firm texture at the pudding’s surface, but the interior was again soggy. The banana slices were a nice touch, but we could have used more chocolate for sweetness.

La Serenata de Garibaldi offered solid preparations of Mexican seafood, which is somehow a rarity in Los Angeles, a city by the sea. The cooking was comforting, especially the appetizers and entrees, and the setting was inspired and colorful. 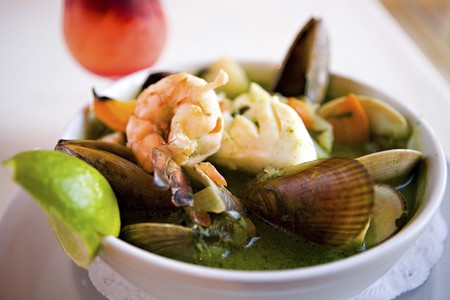 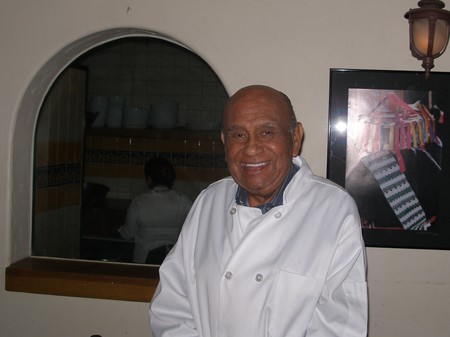 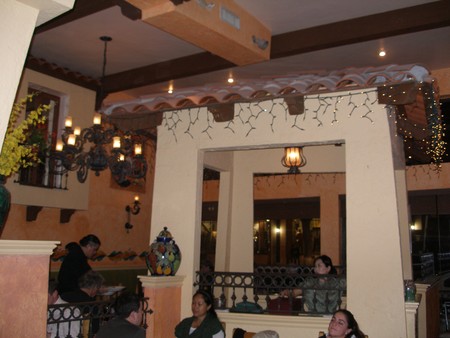 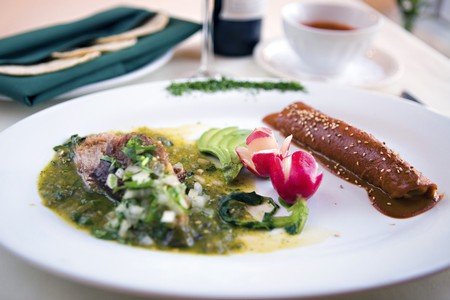 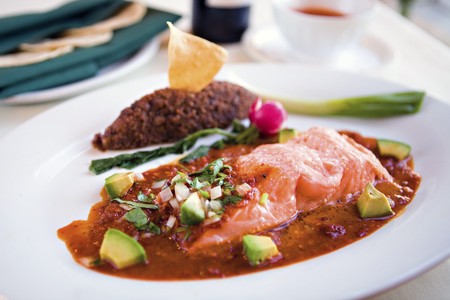 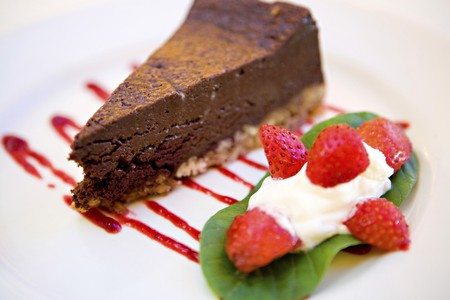 I'm planning to visit you. Do you have a parking?

Yes, there is valet parking available and also a parking lot across the street from restaurant.

I am usually a very adventurous eater. Hense how we found this location just walking on 4th street and decided to go in, even though no one else was inside which should have been a clue. First we walked in and the waiters and hostess were having lunch at a table near the back. The host had the nerve to come up to us with a bite of food in her mouth and still sat us at our table. We ordered our food and to our suprise soup came ,,, but we hadn't ordered any so I asked to switch my soup for a salad,, so the busser woman that brought the soup looked at me and took the soup and brought me a salad... when I asked what kind of dressing was on the salad she said oh it's good you will like it and walked away. Well I didn't eat it because I have a severe allergy to olives and since even the waiter couldn't tell me what it was it worried me. Well I was very happy to see my food arrive however when I took my first bite I noticed the chicken was severly overcooked. And for the 25 ish dollars I paid for it . It should have been better. So a few forced bites and I was done. My husband had a steak that we both laughed at when it arrived it was a shrivled piece of meat that looked like they picked it up off the kitchen floor. The only good thing of the night was the bread pudding , however we ordered two and they only had one and it was lunch time.. So this worries me for a busy night. I will never return again... For our bill of over a hundred dollars I would have expected more. But I was not very happy with la restaurants top 20 pick.