This venue is no longer open.

The Steaks are Worth Claiming at this OC Eaterie

The Gaucho Grill in downtown Brea is one of a mini chain of seven restaurants owned by Argentine Coli Piaggio, with locations from Brentwood to Woodland Hills. The restaurants are a must for anyone who wants to come to grips with Argentine cuisine. The name comes from the gauchos, or cattle ranchers, of the South American pampas (grasslands). Their prodigious appetites would lead them to prepare huge asados (barbecues), and no doubt they would enjoy tucking into the meat dishes at the Gaucho Grill.

The downtown Brea location, which opened in 2003, is situated on a street lined with cinemas, shops, and restaurants. The patio seating gives no clue as to the décor behind the glass doors – it’s surprisingly elegant, if understated, with soft lighting, varnished wood floors, and black booths (as well as some tables). Bold paintings of country scenes dot the walls, while funky chandeliers hang down from the ceiling. From the kitchen emanates a reassuring hiss of grills and bashing of steaks. For, when it comes to cuisine, steaks are what Argentina does best.

Despite having a reservation, we were seated at the back of the restaurant, in the area behind the bar. Our position was slightly out of the way, but on the plus side it gave us a good vantage point from which to survey the whole space. We noted how mixed the patrons were: a gathering of six fifty-something friends, a group of three guys in their early twenties, various couples, and a few families. This is obviously a place that attracts a loyal following; its laid-back ambience would also make it a great restaurant for a lone diner.

Our meal kicked off with a complimentary basket of soft white sliced baguette with chimichurri sauce (made with olive oil, vinegar and finely chopped parsley, oregano, onion, and garlic). In hindsight, given the portions of the dishes that were to come, we should have restrained ourselves, but the sauce was so yummy we dived in headfirst. Our server, Ryan, took our order for drinks. Although the wine list was tempting, our eyes were drawn to another specialty of the house, Margaritas. Ours came exactly as requested – on the rocks, and with a perfectly thick, crunchy line of salt around the rim; the cocktail itself struck the right balance between sweet and sour.

Within a few minutes came the appetizers: two Empanadas – flaky pastries, filled with chicken. (You can also choose beef and spices, spinach and cheese, or ham and cheese fillings). They were light and fluffy, with no hint of greasiness. Inside the casing were generous chunks of chicken, onion, and peppers, all delicately seasoned. Our other choice was also spot-on: Calamari Frito, served with two dipping sauces – mayonnaise and salsa. These were irresistible, the batter hot and herby, the calamari juicy and fresh.

Before we could even finish our appetizers, the entrées arrived. The sight of such huge portions was hard to swallow, so to speak, but we were ripe for the challenge. We’d opted for the pièce de résistance – steak – from a list that goes from simply prepared cuts such as Entraña a la Parrilla (grilled skirt steak) to more complex preparations, such as Bife al Portobello (rib-eye steak with sautéed Portobello mushrooms). Our selection was Lomo Argentino (grilled filet mignon). The quality of the cut was impressive, and the consistency tender and juicy. Thankfully, it wasn’t huge, but we were more than full by the time we’d eaten the accompanying red skin mashed potatoes, which were delectably creamy, and zucchini that was a little too al dente for our taste. We could have also ordered fries instead of potatoes, or substituted a salad for $1.50.

While the filet mignon was plain – rightly so – our other entrée packed a whack of flavor. I’d chosen the Deshuesado al Ajo – two boneless pieces of chicken that had been char-grilled and served smothered with a rich sauce of roasted garlic and grilled onions. This dish is not for the faint-hearted, but at least it would keep the vampires at bay. The chicken came with plain yellow boiled rice – boring to some diners, perhaps, but a good match for the rich sauce – and sautéed broccoli.

Again, the Margarita proved the perfect foil for this dish, but wine-lovers will be pleased to know that there’s also a carefully thought-out list, which encompasses a noteworthy range of Argentine options (particularly Malbecs), plus American and Chilean choices, across a range of budgets. And the cocktail menu is impressive too, with South American specialties such as Sangria, Pisco Sours, Mojitos, and Capirinhas, and a particularly broad offering of Margaritas and Martinis. Beers, similarly, are wide-ranging, and you could have fun sampling the region’s brews, including Quilmes (Argentina), Corona and Negra Modelo (Mexico), and Cristal (Peru).

When it came to dessert, although it was hard to manage another mouthful, we caved in when we saw the (short) list. Dulce de leche is a caramel sauce that’s another South American specialty, and at the Gaucho Grill they put it to good use in such dishes as Flan con Dulce de Leche (caramel custard with dulce de leche), and Panqueques con Dulce de Leche (pancakes filled with dulce de leche), which we ordered. It was a simple dish done well, the crêpes smothered in sugar and grilled so that the sugar caramelized, and served with two generous dollops of whipped cream. Very satisfying.

For no-nonsense, hearty Argentine dishes, The Goucho Grill is a good bet. We’d have preferred a different table (especially as we’d made reservations), since we felt slightly out of the way and it took a while to catch the attention of a server to bring our check, but overall the service was pleasant.

It’s also worth pointing out that, despite the obvious meaty theme here, there are plenty of vegetarian options, including a vegetarian salad, plus a good range of appetizers, including Provoleta (a wedge of melted Provolone cheese, served hot in a iron skillet topped with tomatoes, basil, oregano, and olive oil), Minestrone Soup, and Sautéed Mushrooms with white wine, garlic, and parsley. The menu also encompasses fish dishes, salads, and a few sandwiches. But if your appetite isn’t up to tackling the main menu, don’t feel you have to miss out – why not stop by for a drink and snack at the bar? Prices are reasonable, and even better during Happy “Hour” (all day and night, Sundays through Thursdays). 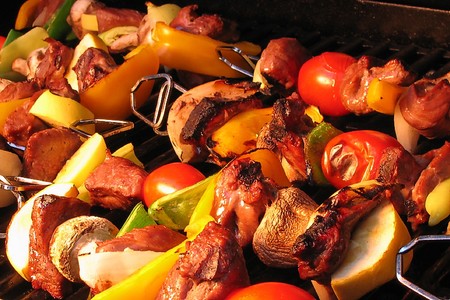 I ordered 2 parillas (mixed meats) for 4 persons, 1 veggie soup & 1 steak with crumbled bleu cheese. for starters our mashed potatoes were brought out super cold as well as our zuchini/squash our meats were pretty low quality @ best. the chicken was very dry & tastless, our steak with bone also was tastless & almost burnt!!! the blood sausage which 4 of us agreed....was a pretty bad, and what made it worse was that it was oozing all under the bottom of our meats, we were trying to clean blood sausage off our meats. the other meats were just as bad they seemed old and not fresh @ all. The soup my god...the soup! was terrible no taste at all whatsoever it was bland, no salt, it seemd super watered down. my wifes bleu cheese steak was better than our parillas , I gave that a 5 on a 1-10 scale.