Boasting a decidedly contemporary and chic décor, BOA Steakhouse is a refreshingly unpretentious steakhouse. Serving classic steakhouse fare in a particularly un-classic setting, BOA brings a fresh, modern face to the “surf and turf” dining concept. While you’ll find all the old favorites—petit filet mignon, dry-aged New York strip, Maine and Australian lobster—creative fare also peppers the menu. Begin with the Table-Side Prime Steak Tartare, and then move on to favorites like the Chilean Sea Bass and the American Kobe Beef Flat Iron Steak. But the ultimate decadence may just be the foie gras butter you’ll find gracing your Kobe Steak. 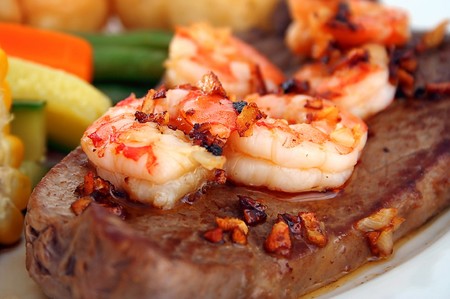 Are they the same as the one in Las Vegas?

Do they have a patio?

Do you offer a discount for AAA members?

How many BOA locations are there?

Do you serve whole lobsters?

With so many choices in LA, Boa ended up being an excellent choice for dinner. I would go back anytime.

The ambiance was great. Location is hard to beat with many options for things to do after dinner.

THE WAITER WAS RUDE......THE STEAK WAS VERY FATTY AND I NOTICED THE GENTLEMAN AT THE NEXT TABLE SENT HIS BACK (BONE IN RIB-EYE)I WENT BACK AND HAD LUNCH AND JUST ORDERED THE HAMBURGER.....THIS TIME THE WAITER WAS DELIGHTFUL AND THE HAMBURGER WAS FINE...WOULD NOT GO BACK FOR DINNER,BUT WOULD HAVE LUNCH AGAIN

The average person ate in the main room which felt cold and not very romantic. There was 1 room in the distance that looked nice, and I wish the whole restaurant was decorated that way. The food was good as well as the service. Although, my husband wished that they would have asked if he liked his beer in a glass before pouring it. I guess he likes it in the bottle instead.

I can honestly say this was such a bad dining experience that I had to write a review. The blonde Maitre d' was an utter mess. The place does not "guarentee" outdoor seating (which is the only redeeming quality about the place), which is understandable. But we made our reservation over three weeks ago, and called twice to request outdoor seating, and were told it wouldnt be a problem. When they took us to our table, which was not even ready when the hostess led us there, it was in a back, dark corner (and there were many other weirdly set up tables in corners). When we asked to speak with the maitre d', she proceeded to tell us that we had made our reservation online, and she "doesn't trust those types of people" and they save their outdoor seating for their patrons who come five nights a week. Now honestly, I dont want to sit outside with someone who goes to BOA 5 nights a week. When I think steakhouse, I DO NOT think BOA, but rather someone like CUT, Mastros, or STK. The place food was mediocre at best, and the service was slow, and we were ignored most of the night. And on top of that the drinks were overpriced and completely watered down (which I've noticed is a trend in the Innovative Dining Group's other restaurants, especially Sushi Roku). If the night before I was able to sit on the packed patio of Cecconis in West Hollywood, which is much more of a scene than BOA, something is obviously wrong. The maitre d' also explained how they were very trendy right now, and we were lucky to even have a reservation b/c the place is so much of a "Hollywood scene right now". Please. We heard BOA has a new location, so we wanted to try it out, and this just proved that Innovative Dining Group is once again inferior to groups like SBE and others who can put on a much better show. Overall, I would say skip this, and spend your money at somewhere like STK or CUT where you will be treated better, have a better meal, and feel much better about your night.