Situated discreetly where funky and hip Abbot Kinney boulevard dead ends, Beechwood is the perfect haven to morph into the trendy hipster scene of Venice. The modern warm wood décor creates a relaxed atmosphere, whether you are enjoying the signature Pan Fried Chicken Paillard in the secluded rear dining room, or a Kiwi Vodka Caipirinha in the comfortable, noisy space of the enticing bar area with its fire pit, low chaise lounges, and communal tables. There is no doubt that the stylish crowd is drawn in by the innovative twists on international comfort food, diverse wines and specialty cocktail list as much as the lively atmosphere, making it a splendid destination to chitchat and chow down.

So you’ve strolled the boardwalk, struck a snapshot on the pier, and survived the racket of beach bars.  What next?  Time to get out of tourist terrain and find the true heart of Venice, a once-dangerous area where the swank is rapidly taking over the shabby.  In this vibrant neighborhood, amid the honeycomb of artist studios, cutting edge architecture, and stylish galleries—all tucked between original brick facades, warehouses, and quaint streets—Beechwood Restaurant stands out as a stylized destination spot.

Occupying the former space of Menemsha, this modern yet comfortable gathering spot has managed to hold the attention of fickle hipsters since 2004.  In what is a bit of an anomaly, Beechwood is a social destination where the food is as stimulating as the atmosphere.

It should come as no surprise that the team behind this seamless amalgamation of restaurant and bar is a mesh of the culinary and nightlife worlds. Beechwood is the brainchild of esteemed culinary duo Brooke Williamson and Nick Roberts, co-owners of Amuse Café Venice, and Dave Reiss, owner of successful nightspots The Brig and Club Sugar.  Combining their extensive knowledge, they created a space that pairs an inspired menu of international comfort food with a carefully constructed ambiance of plush seating, dim candlelight, and modern décor.

Passing through a discreet façade, we entered Beechwood from the side and were thrust into a large noisy bar area with is comforting mixture of low chaise lounges and modern wood paneling.  Beyond, we caught a glimpse of an even larger open outdoor area with communal tables and fire pits.  However, the restaurant doesn’t end there; we also had the choice to retreat to the rear, secluded main dining area.  This set up is what makes Beechwood so unique: whether looking for a quiet evening or a raucous social experience, you can select a setting accordingly.  However, be aware that on weekend evenings, the noisy atmosphere seeps into the dining room, making it less a place for escapism and more a focal point for mingling.

When my party arrived on a Thursday night we made the fitting decision to avoid the already thickening bar crowd and enjoy our meal in the more secluded back dining room.  After being seated, we were surprised to find, in addition to two food menus—bar and dinner—there was a wide drink offering. Pouring through the wine, beer and specialty cocktail list, we were still stumped by our drink order long after the server brought us an overflowing basket of fresh assorted bread. The clear favorite was the warm crusty cheese bread, which made it a challenge to not fill up before we even ordered our meals.

The drink menu is also set up nicely for groups that may not have the same drink tastes, especially with its varied selection of reds and whites by the glass.  Most of the reds were blends, however I chose the very smooth, mild-bodied Kings Ridge Pinot Noir 2005 from Oregon.  There were only three beers on tap, yet the bottle list was extensive and our table decided on a rare find: a bottle of Saison Dupont Farmhouse Organic Ale from Belgium.  Perhaps the most inventive choices were on the cocktail list and we choose the ‘Dark and Beechy,’ a refreshing and unusual mix of Pyrat XO reserve rum, ginger beer, and lime served over ice.

Now that we had placed our drink order we could turn our attention to food menus.  Although the bar menu offers a good selection, the entrees are more complex and creative on the dinner menu.  The theme of both menus is a varied sampling of international dishes that have been fused with American cuisine.  This makes for inventive fare that, while palatable to less adventurous eaters, has also lost any sharp ethnic bite.  Good examples of this were our starters: the Baja Style Black Bean Soup, Greek Salad with marinated white anchovies and the Whole Roasted Artichoke.

The soup came in a deep, wide bowl filled to brim, with large pieces of chorizo and avocado poking through the surface.  Garnished with a thin swirl of cream, the slightly sweet soup was very tasty, especially when combined with avocado and chorizo. The broth itself seemed more Tex-Mex than Baja-style, and it was hard to taste the chilies and cilantro that were mentioned on the menu.

The salad was presented on a medium round white plate, five whole marinated anchovies laid in a pinwheel pattern on top a bed of brightly colored red, yellow, and green peppers, tomatoes, olives, and feta cheese, all glistening with homemade Greek vinaigrette.  Although the salad was not much more than a typical Greek with a couple of marinated anchovies, the variety of fresh vegetables was bright, colorful, and enjoyable.

The best starter was no doubt the artichoke, roasted and served whole, cut carefully down the middle and lightly sprinkled with crumbles of parmesan cheese. The artichoke had been cooked till tender, with each bite revealing its vibrant roasted flavor.  A great accoutrement to this already-tasty treat was the creamy and flavorful basil aioli, one of the two dipping sauces served in ramekins on the side.  The other sauce was a smooth but standard Russian dressing that was good, but a bit overpowering for the delicately roasted artichoke.

Just we were scraping the last of the aioli from its ceramic white dish our entrees arrived, pleasantly surprising us with perfect timing.  Upon first glance it became evident that the entrées were where the chefs truly showcase their talent.

Served on an oblong platter, the Roasted Arctic Char was cooked tenderly and placed atop a bountiful array of tomato confit, savoy cabbage, and bacon, all encompassed in a mustard cream sauce.  The thick fillet had easily navigable bones and closely resembled salmon, but with a slightly milder flavor. The mild flavor allowed the well-balanced mustard sauce to penetrate and become well integrated with the dish.

The tremendous portion of Rigatoni Lamb Bolognese, made our table almost gasp. However, after the first bite of perfectly cooked al dente rigatoni and Spanish sheep milk cheese, we were all overjoyed to have such a large portion to consume.  Unlike beef in a traditional Bolognese, the lamb gave the sauce a bolder, more rustic flavor. The strong flavor of the lamb permitted it to be flawlessly paired with such a robust cheese, altogether creating a harmonized dynamic taste.

However, even though these two dishes were outstanding, our third entrée, the Pan-Fried Chicken Paillard, was the most phenomenal.  The moist, breast-meat cutlet was fully encased in a warm, flaky, homemade phyllo dough crust, having a complexity of flavors that surpassed any cutlet I’d had outside New York.  The excitement didn’t end there; this scrumptious creation was centered over a large helping of warm potato and wilted escarole salad.  The textures of this dish were so well harmonized that each bite offered both a satisfying crunch and a moist, warm melody of chicken, potato, onion, and escarole.  This was a dish to savor to the last marvelous forkful, and no visit would be complete without ordering it.

Since all of our portions were healthy and the food filling, the question after our meal was whether to try to fit in one of renowned pastry chef Brooke Williamson’s signature desserts, or move to the now-happening bar scene for an after-dinner drink.  We opted for the latter, and gladly went to digest our meals sitting on a modern chaise lounge under the stars, warming up our bodies from one the fire pits.

As loud music permeated through the array of trendy scenesters, it was hard to believe this chatty crowd would ever appreciate the sophisticated dinner we had just enjoyed.  But that is the charm of Beechwood: located in a vibrant town thriving in the shadow of old industry, it offers substance behind the trendy attractions. 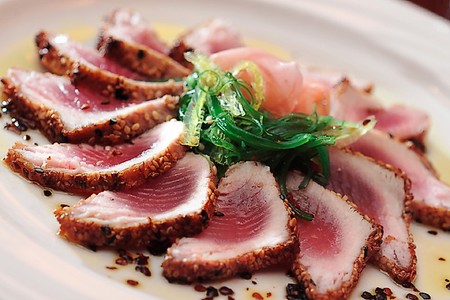 This place is kinda hard to find. The sign is about a size 20 font on a fence covering the restaurant. The food was pretty good. The ambience is great with the lounge seating and outdoor firepits on the patio. Food was a little over priced for the quality, but it's a nice place for drinks and just to hang out with a trendy crowd.

Hollywood Attitude for no apparent reason...

In two words, baseless arrogance. Despite a decor that would be cutting edge for a suburban Chili's in Wisconsin, the staff at the Beechwood seems to think that they belong on a movie set. After taking a friend from out of town to this disaster of a spot for drinks after dinner, I was rudely told by a bartender to close out my $12 tab immediately at 1:15 AM.

Before I could sign out, a barback/ bouncer advised that I tip more next time (keep in mind here, I have lived here for less than six weeks and have never been to this place before).... While I am new to LA, as someone who has worked in the service industry of a well regarded ski town, I can say that an outdated and/or lame decor, poor service, and an aggressive attitude from staff is a losing combination.

TAKE YOUR MONEY SOMEWHERE ELSE AND BE TREATED WITH THE RESPECT THAT YOU DESERVE....